Tirolerisch G’spielt convinces with young, cheeky dialect austropop, which shows without a doubt that its origin is rooted in typical tyrolean folk music. Tirolerisch G’spielt has succeeded in combining austrian folk instruments with catchy tunes and beautiful lyrics. Swinging songs with lyrics taken from life. Songs to sing along. 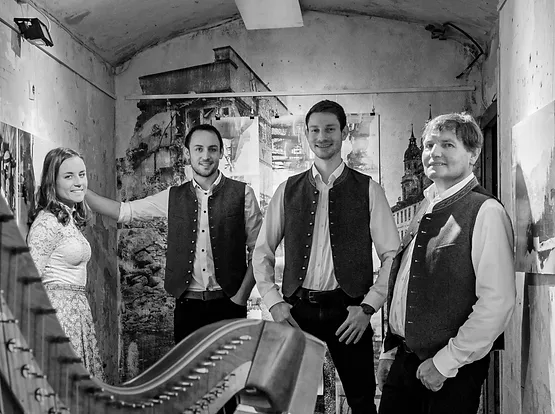 In 2006 the project was started. The basis of their current music was of course the Tyrolean folk music. Since this alone felt a little bit too monotonous to them, they tried themselves trying different musical genres interpreted with the same traditional instruments.

Tirolerisch G’spielt is especially characterized by the voice of Hanna Maizner. Hanna is a very talented singer, songwriter and musician. Within austria she is well known as member of the band Harfonie. With Harfonie, Hanna was able to celebrate one of her biggest successes so far - she won “Die Große Chance” - a famous austrian talent TV show.

A typical instrument for an austrian folk band is the diatonic harmonica (commonly referred to as: “steirische Harmonika”, a kind of accordeon with styrian origin). It is played by Michael Angerer. Michael is a music-teacher at the musical school of Wattens in Tyrol, teaching the “steirische”.

Commonly heard throughout songs of Tirolerisch G’spielt is the Hackbrett (a type of a hammered dulcimer). It is played by Daniel Maizner - brother of Hanna. Additionally to the Hackbrett you can hear Daniel playing the Trumpet, and singing background vocals.

Finally, a good band requires a solid percussive foundation. This is where the father of Daniel and Hanna comes into play. Paul Maizner specializes in drums, cajon and other rythmic instruments. Sometimes one can hear Paul playing the Double bass throughout the songs.

Translated as “free like the wind”. The vocal performance of Hanna in this song was most fascinating to me. After this song I considered myself a “Tirolerisch G’spielt Fanboy”.

Translated as “second chance”. Traditional folk music, with a new pop makeover. If you can hold your feet still, something might be broken.

Thank you for reading ❤

I hope you enjoyed reading this article. Maybe it was helpful to you, maybe it was not? Maybe you learned something new? You disliked the article? I'd be glad to hear your opinions. Your feedback is much appreciated and very welcome. Either (anonymously) write a comment in the section below, or send a mail to blog@rtrace.io